Emo Corner is a website dedicated to emo guys and emo girls. You will find this to be a good source of information on everything emo and a place for emos to talk and hangout. 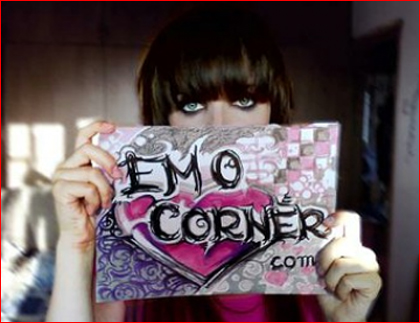 When you are refering to someone has being emo, you are usually are stating that they are sensitive, or have a emotional personality. emo truely is a type of music that started in the eightys and is rapidly moving back in its popularity. It's a sub genre of punk music which has grown to be more popular then punk it's self. Each and every day more and more emo bands are coming out. However, emo most commonly is refered to as a type of fashion.


What is the Definition of Emo?

emo hair has sharp edges and shapes. It does not always have bangs, but it usually does have some chunky sections twisted or pulled in a direction that conflicts with the rest of the hair. Girls and guys have emo styles of hair, and they are pretty much the same. Girls might have longer hair than guys, but they usually do not have hair past their shoulders.


What does emo mean to you?

We love to hear everyone unique opinions on what emo means to them so send us your thoughts on what emo is to you. Most peoples common perception of emo is someone who is very emotional. Some people just consider emo to be a sense of style.


Speak out at the Emo Forum